I wonder if there’s such a thing as ramenholics anonymous in Japan. If so, I think I need to go. Wait, but that would mean I’d have to give up ramen…F THAT! Only two more instant ramen packs remain and I’m not sure what I’ll do without them. I’ve been eating them in order of expiration date so hopefully the best are towards the end. Although I doubt they can get much better since all of them so far have been top notch. Next up is Kairyu. A ramen-ya from Kurume city and their dotonkotsu ramen. That pic on the box looks so good. It’s too bad those slices of chashu aren’t included.

This pic below was a card from inside the box. I just thought I’d share it because it looked pretty cool. 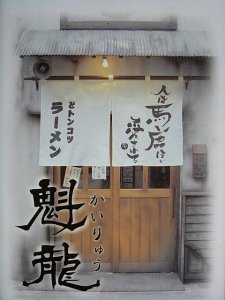 The contents include a pack of heavenly blonde noodles and a pouch of Kairyu’s famed kotteri soup. 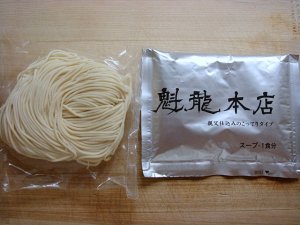 This soup was very garlicky. I mean VERY garlicky. Is garlicky even a word? Wouldn’t that be a cool name for a dog? Here garlicky licky… What am I saying? The overwhelming sense of garlic has made me lose it–not that I ever had it in the first place. But seriously, this garlic aura is making my head spin. Aside from that, the soup was very light and became creamier with every sip. It really could have used some toppings. I have to go open the window now to get some fresh air in here.

The noodles were a little thinner than the average hakata-style, but that didn’t take anything away from its texture. It was a good noodle that left me looking for a kaedama. I guess we always can’t be so lucky. 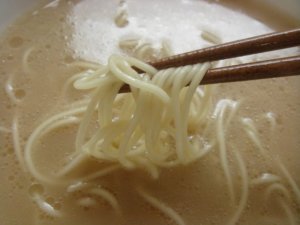