I’ve finally made it to San Francisco! It’s been a couple years since my last visit and I’ve yet to blog about any of the ramen-ya’s up here, so for the next four days I’ll be staying at my brother’s house in the city and spending my time slurping frantically in search of a good bowl. Luckily, the weather is about 20 degrees cooler than LA so I won’t have to worry about slurping in triple-digit heat. Nice!

After the long drive up, my first stop (recommended by my brother) turned out to be Suzu, a popular ramen house in San Francisco’s Japan Town. [I won’t get into how much Japan Town has changed since I was a kid, but let’s just say it’s definitely not the same.] Anyhow, Suzu doesn’t seem like it’s Japanese-owned, but if my brother likes it…then…let’s go!

“Tokyo” Ramen: I love shoyu ramen. So if you name a ramen “Tokyo” ramen, it better be a damn good shoyu ramen. Well…unfortunately this wasn’t. The soup was supposed to be a mixture of chicken and pork broth, but the chicken stood out and for the most part masked the pork flavor. And I wasn’t sure if it even contained any shoyu. The toppings (chashu, egg, menma, seaweed, and a single bok choy leaf) were nothing to brag about. The chashu was overly salty and didn’t really taste like pork. The noodles were also mushy and overcooked. Overall, Suzu didn’t live up to my expectations–sorry bro. 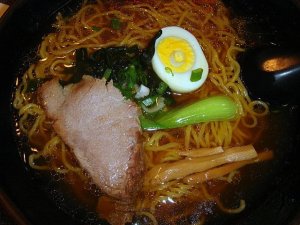 Shio Ramen (New Special): “Sublimely tart and zestful, ‘Shio’ is an invigorating sea-salt Ramen blended with chicken broth and pork broth” states the description on the menu. Uuh…I got none of that. It was more like a salty chicken soup. The toppings were the same as above and the noodles…nevermind. Let’s just say my brother’s vegetable udon used the same broth. 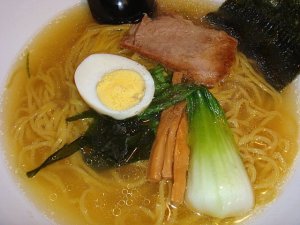 Gyoza: The gyoza was clearly a disappointment. The skin was too pasty-tasting and ruined the rest of the flavors. I probably wouldn’t order these again.

Okay, so it’s only the first night. Tomorrow, it’s off to San Jose!