Since we’re no longer able to text message while driving in California, how about email? The long-awaited movie, The Ramen Girl, finally hits theaters (in Japan) on 1/17! One question: Which is worse, straight to Japan or straight to DVD? Someone asked me yesterday what the big deal was with the upcoming Presidential Inauguration. He is from Uzbekistan…I let it slide. The other day, I was traveling well over the speed limit on the freeway when a cop pulled up next to me, shined his big, bright light in my face, and then sped away. It’s a good thing I wasn’t text messaging!

I’ve been stuck at home feeling a bit under the weather lately, so I decided to crack open one of the canned ramen I brought back from Japan last year. According to the label, it’s just called Shoyu Ramen. Simple…I like. I can’t remember exactly where I bought this one, but it must have been somewhere in Akihabara. After all, that’s where most of the ramen vending machines are.

My first reaction after opening the can was: [CENSORED]. Exactly. These cans can last for years so it is highly unlikely that I was staring at some type of fungus. It turns out that it was just some good ole lard clusters that blended into the soup after I applied some heat. The directions on this can actually recommended that you reheat the ramen in a pot and not in the can. So being the rigid servant of society that I am, I obeyed.

To my surprise, there were two real-looking pieces of menma and one naturally fake-looking piece of chashu. The menma tasted like mushma (whatever that is–I couldn’t find it in edjusted’s glossary) and the chashu tasted exactly like cardboard with a hint of vinegar. Mmm…the resemblance was amazing. The soup had a soury sensation of overwhelming fishiness. To put it lightly, it was disgusting…haha. 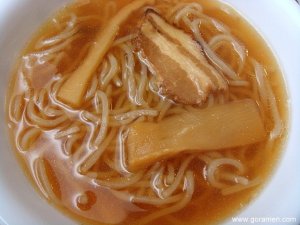 The noodles are made with konnyaku (konjac) to combat the effects of sogginess. They pretty much tasted like those you would find in Sukiyaki (the dish not the song).

I don’t know. Maybe these things taste better straight out of the machine. I still have a few more types to try so hopefully they’ll be better than this one. Because this one tasted like crap!