Restaurant Yama has been around for a long, long time–41 years, to be exact. I’m not sure when exactly during that time they decided to serve ramen, but on a recent visit (my first) I was shocked to see “Chanpon” and “Chashu Men” on the menu. Yeah, I know this isn’t a ramen-ya and if you’d ask a regular what Yama is known for, they might just say the teriyaki, tempura, and fried oysters. But…since I am who I am, I only have eyes for one thing…

Chanpon: I don’t feel like saying anything bad about this restaurant so it might be best if I don’t say anything at all. Well…alright, since you keep twisting my arm I’ll say something, but I’ll still keep it brief. The shoyu-based soup here was plain (but still good) and the sauteed vegetables thrown atop added some extra flavor to create a nice, light Chanpon. The Chinese-style chashu was a slight disappointment, but like I said…this isn’t a ramen-ya.

The thin soumen-like noodles were the biggest disappointment of all. This soup could have definitely used something thicker. So if there ever is a next time, I think I would ask for the thin udon noodles instead. Yeah, that might do the trick! 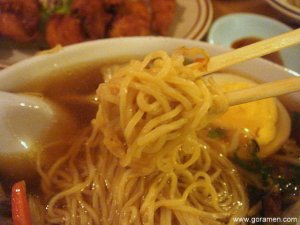 Tatsuta-Age: The fried chicken was outstanding!

There’s some history here on why I didn’t want to say anything bad. I’d rather not get into it now, but if you’re dying to know, email me. But be forewarned, it’s really sad…