Ever since Day 53, I’ve been deathly ill with the worst stomach pains. Okay so I’m exaggerating a bit, but I still felt like crap all day. I wasn’t sure if it was the ramen I ate or what, but I was suffering. Let me just put it this way: Squatting toilets should be banned! haha. tmi?

Because I wasn’t feeling so well, Ivan made me this “Ivan Original” okayu (rice porridge). It was so damn good! 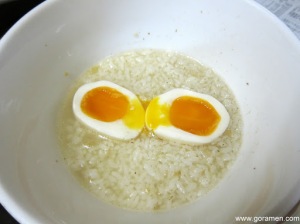 Today was a pretty crazy day. We were already down one staff member and a surge in customers almost doubled our Monday average. Plus Basil Childers, a photographer for the NY Times, came in to take pictures for Matt Gross’ upcoming article on ramen. It’s going to be epic!

One more thing, a drunk man came in as we were closing, ordered the shoyu ramen, took a couple bites, then fell asleep hunched over his bowl. I thought it was hilarious! And then when we woke him up he had the nerve to say that the flavor had dropped. The nerve!! That fool was so drunk he started yelling at people on the street as he left. I have a feeling this won’t be the last time I see something like this.