After being coop’d up all day, I was feeling much better and was in desperate need for some ramen! There are still several places closed for the new year, but my ruddy (ramen+buddy=ruddy. yes I am a dork!) Nate had mentioned that a new ramen alley had recently opened in Koenji. A quick bike ride later and I was ready for my first bowl of 2010.

There are four shops that make up this new alley: Mouko Tanmen Nakamoto; Tsukemen Tetsu; Torisoba Daiki-an; Tanegashima Shouten Kunigamiya. I chose Daiki-an because I needed something refreshing. (The original Daiki is located in Yushima near Okachimachi Station.)

It was tough to decide between their Ume-Shio Torisoba or their Shoyu Torisoba, but I was in the mood for some shoyu.

So I ordered the “Special” Shoyu Torisoba. What? You want a closer look?

This was exactly what my ramen-deprived stomach was craving. A nice, clean shoyu to bring back memories of my childhood. 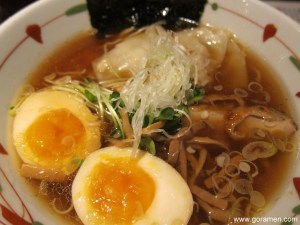 The chicken was tender and possibly the best I’ve ever tasted in a ramen.

The noodles were firm and easy to slurp, but that hanjuku egg just left me speechless.

The chicken wontons were amazingly good as well.

Now I’m off to go find my second…