Hmm…the temple of money sounds better than the temple of apples. Maybe I should live in Koenji. Anyway, I visited a ramen shop called Menya Enji (en meaning money and ji meaning temple) to treat myself after getting my stitches out in the morning. By the way, the pinky is healing just fine.

Enji has been on my list for quite some time because it is close by and they serve a vegetable potage tsukemen that has been getting some rave reviews lately. Nate’s been there, but he ordered the wrong thing and still thought it was tasty.

The noodles are a bit darker than usual which leads me to believe that they use some type of whole wheat flour mixed with regular flour. But that’s all speculation so don’t quote me on it. haha. They had good bite and on this cold day I definitely went with atsumori. (p.s. the noodles took 6 minutes to cook,)

The soup is a triple mix of tonkotsu, gyoukai (fish blend), and a vegetable potage made with mountain potatoes. It’s not extremely thick, but it’s smooth and scintillating.

Seriously, this has to be one of the best tsukemen’s I’ve had in awhile. It’s hard to explain, but the fish was not overbearing due to the potage and the tonkotsu didn’t feel greasy either. I was extremely satisfied with this bowl. Even the self serve soup wari kept the aromas and flavors intact. Impressive!

Afterward, I hung out in the nearby Sanshi-no-mori park where I found two young aspiring comedians practicing their Manzai act into the loud waterfall. It was nice to see others working hard in pursuit of their dreams. 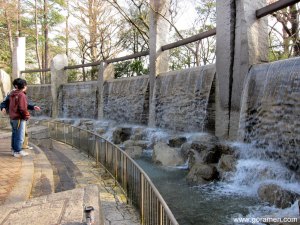 One more night of work, then two days off!!

4 Replies to “The temple of money…”