I had to go to Shibuya in the morning to pick up a new toy. And since I was in the area, I decided to check out Ramen & Kanmi Kugatsudou (らーめんと甘味処 九月堂). Kanmi means sweetness which I’m pretty sure refers to all the different desserts on the menu.

This shop, run by Takashi Inoue, just opened in August 2009 and is probably one of the most stylish ramen shops I’ve ever been in. 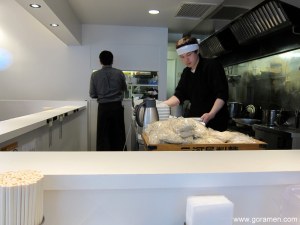 It’s almost too pretty. But I guess that explains why the majority of the customers were female. This guy may be on to something. 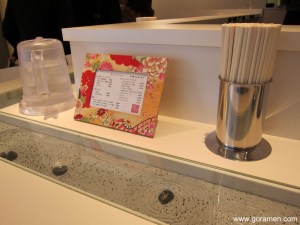 Apparently there is a shio ramen on the menu that was created in collaboration with Menya Sou, but I chose to go with the so called “special ramen” instead. Normally, you get to choose between assari or kotteri, but for some reason kotteri was not an option today.

This ramen actually surprised me. It’s a blend of fish, chicken, and pork that is well balanced and downright beautiful.

The noodles are of course from Mikawaya Seimen, which doesn’t surprise me one bit. They make some legit noodles for being a noodle factory. I think noodle companies in the states should take notice. Did you hear me Sun Noodle? haha. 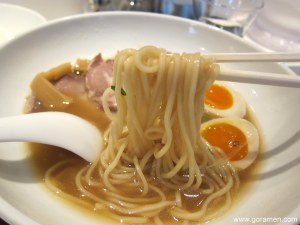 The egg is what really shocked me. The flavor was inexplicably good. Seriously, I was shocked when I put it into my mouth. It was sweet with a hint of ume (salted plum). But it wasn’t the whole egg. It was just the yoke. Which leads me to believe they inject the flavor into the yoke because I didn’t see them pouring anything on top as they prepared the ramen. I would go back just to try the egg again.

Anyway, here is the aforementioned new toy I bought today. It’s called Pocket WiFi and it’s what I’ll be using from now on to get online. It uses a cell phone network to connect to the internet and emits wifi so I can get online from anywhere. It’s pretty cool.

4 Replies to “A sensual slurp…”