It’s been weeks since Brian, Nate, and I met up for ramen so I forced myself to wake up a little early and meet them in Shimo-Kitazawa for lunch. Brian wanted to check out the Spain Bar, but I led the three of us to Yajirushi instead because I’ve heard that they make their own noodles.

The shop is hidden from the street and you have to walk through a little alley to get there. The shop itself is warm and inviting, but the owner on the other hand… 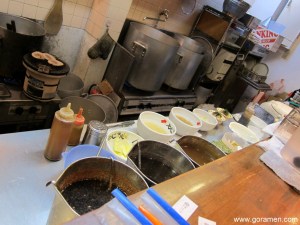 I was told the shio ramen is what is good here. Yeah it was good, but I didn’t think it was anything special.

The noodles also weren’t very impressive. I was expecting something a little more special being that they were homemade.

The bad part was that the owner was kind of a jerk. Oh well, time to move on!

After a brief stroll through Shimo looking for a coffee shop to chill and catch up on things, we were inherently led to the Spain Bar where they serve an Iberico Pig Ramen for lunch only. Even though we were full, Brian thought it was fate that led us here so we did what we almost always do–slurp a second bowl!

So glad we did! This Iberico Pork Shoyu Ramen was amazing.

The topping of onions covered in olive oil and black pepper was indescribably delicious. The chashu was amazingly tender and savory as well. 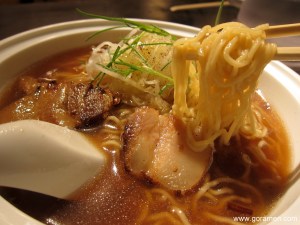 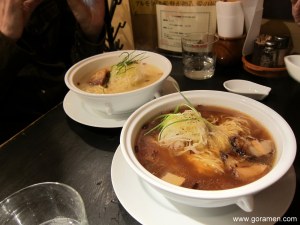 I WANT it again!

2 Replies to “The good, the bad, and the Iberico Pig Ramen!”