I thought about going to see gramps, but it was pouring rain outside and plus my bike fell apart on me again after riding home in the rain last night. Instead, I stayed in and ordered a pizza.

Today was also supposed to be my day off, but I agreed to come in and help with the green curry paste prep. And before we opened, I went to go scope out the new competition down the street.

Soul men? Not quite BMac or SamL, but I found myself cracking up at this logo. The “What’s Up, 麺!?” is fricken hilarious! 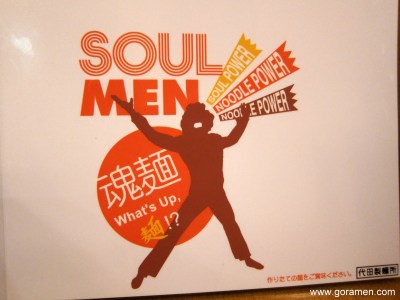 Anyway, Soul Men (魂麺) just opened a couple weeks ago and they specialize in a Tori-Paitan (鶏白湯麺) ramen, which is basically chicken boiled at high temperatures until it gets creamy. One sip and I was no longer laughing. It actually had a lot of soul and its creaminess was very soothing. This shio version was light and had a very natsukashii-aji, in sort of a Japanese-American way….whatever that means.

Soul Men is also a part of the Daita Noodle Factory (代田製麺所), which means they make their own noodles in the back. I’m not sure if any popular ramen shops use them, but it’s all good with me. The Paitan ramen usually comes with thin noodles, but they gave me a chance to try it with the hirauchi. It felt like I was eating linguini. 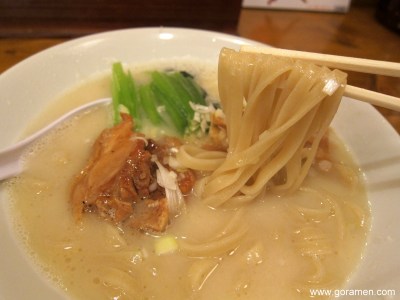 Guess what?! Bassanova will be celebrating 8 years of being in business this weekend. Everyone who comes in gets either a free hanjuku egg, small rice, or extra noodles. See you there!!