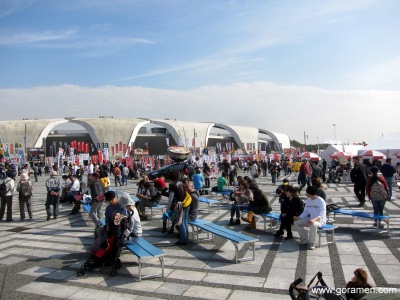 It’s getting difficult to count how many shops collaborated with each other within the 28 total booths serving ramen, but I had my eye on one bowl from the start: Saikoro and Fukushima Syndicate (さいころ x 福島シンジケート).

When Boom and Brian finally arrived we all agreed that the Tomita and Muteppo bowl would be the one to try next. Unfortunately, so did a lot of other people. 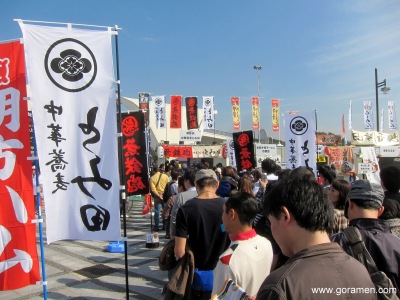 So while Brian stood in line for the aforementioned bowl, Boom and I decided to split up and maximize our limited time. I decided to get the “dream collabo” between Rokurinsha, Ganja, and Tetsu (大つけ麺博ドリームコラボ).

Now imagine combining the soups from these three big tsukemen shops (because they all taste somewhat similar) and adding thin noodles to make ramen. It was dreamy.

It was a sweet bowl with loads of ginger and a mega long piece of chashu, just like it was described. 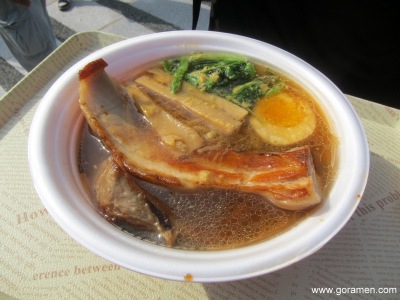 Now this bowl was straight dirty. The soup was thick and clung to the noodles like mud, as a Muteppo bowl should. But it was a bit difficult to tell what Tomita brought to this collabo.

Ikuta-san!! (from Nagi) Hey Hong Kong peeps, another Nagi aka Butao will be opening up soon!

Although he is the grandmaster of this event, Chiba-san has always looked more comfortable without the suit and in a booth making ramen as he should. So naturally, Chiba-san had a booth this year too.

Shinkamome Shokudou (新かもめ食堂) from Kesennuma City was a welcome refreshment from the last bowl. A nice, clean blend of tai-dashi and chicken. 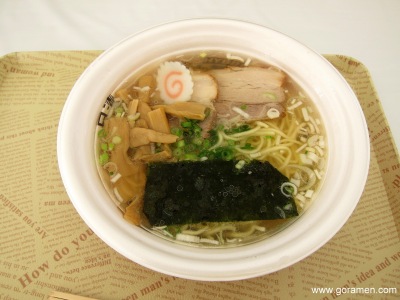 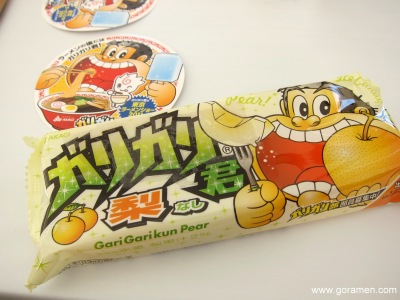 Once Nobo and Tak finally arrived, we began to sample some more bowls. This all-beef ramen from Tamagumi (多摩組) had to be one of my favorites from this years show. Interestingly, it tasted like a hamburger. 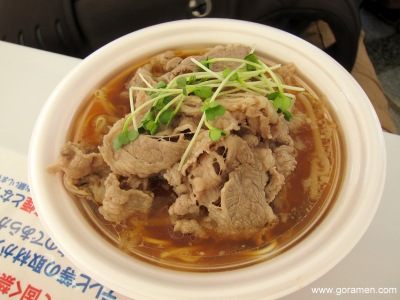 Of the many shops collaborating with tonkotsu this year, this KINGKONG and Hakata Ikkousha (池麺KINGKONG x 博多一幸舎) collabo was an appropriate stinky mess.

But this ramen from the Kouji Group (麺屋こうじグループ), one of the biggest ramen groups that include Tomita, Honda, Ittou, and practically all the Taishoken shops, was definitely one to remember. 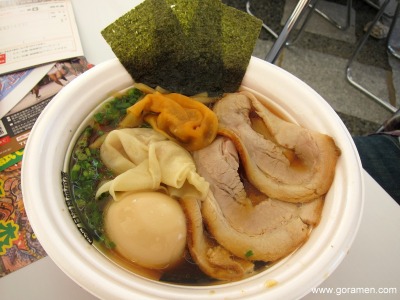 Lastly, (there was no way we would be able to try all 28 bowls) Brian brought over the Keisuke and Hakata Shinpuu (けいすけ × 博多新風) collabo. I’m not much of a fan of either so I’ll just leave it at that. haha.

So there you have it, Tokyo Ramen Show 2011. My apologies for not posting this sooner. And also one last important thing. Happy Birthday to the lovely assistant!